First GIG of the year!
University of Falmouth
6th May 2011

UK Premiere of V'Oct(Ritual)
(for vocalist, Bodycoder, live MSP and multi-channel sound diffusion)
The concert will also include Etch (2007), Amera and Ghosts


Full Concert Programme
V'Oct(Ritual) (2011) UK Premiere
(for vocalist, Bodycoder System, live Max/MSP and automated and performer controlled 8-channel spatialization)
Duration: 18 minutes
V’Oct(Ritual) places the audience inside a circular liminal space of sonic evocation and transformation the boundary of which is defined by the presence of eight loudspeakers (21st century standing stones) that mediate and are the containers for the performers’ vocal transmogrifications.
V’Oct(Ritual) features the Bodycoder System© the first generation of which was developed by the artists in 1995.  The Bodycoder interface is a flexible sensor array worn on the body of a performer that sends data generated by movement to a Max/MSP environment via radio.  Movement data is mapped in a variety of ways to live processing and manipulation. All processed sound is derived from the live and acoustic voice of the performer. The Bodycoder also provides the performer with real-time access to processing parameters and patches within the Max/MSP environment as well as control over the sensitivity of sensors. In this way all vocalisations, decision making, navigation of the Max/MSP environment and qualities of expressivity are selected, initiated and manipulated by the performer, uniquely, this also includes access to gestural control of live 8-channel spatialization.  This piece is fully scored with few moments of improvisation.
V’Oct(Ritual)  was created in residency at Dartington College of Arts (Totnes) in 2010.
Ghosts (1997)
(concert version with video)
Duration: 7:55 minutes
Inspired by three legends from the Aboriginal Dreamtime – a time when man was in direct contact with the spirit world.  Ghosts was originally commissioned for 4 Composers, 4 Choreographers as a dance score with funding from the Arts Council of England.  The sound sources for the piece are derived from a C sharp Didgeridoo and a variety of homemade Spirit Catcher instruments. Samples were manipulated using Sound Designer and Alchemy software.
Amera (2007)
Duration: 8:28 minutes
Amera was composed using soundfiles derived from field recordings taken in various localities in Devon and Cornwall including the boat construction yard in Polruan and the Funicular railway at Lynmouth.  This material was then processed using a variety of techniques in MSP, particularly Phase Vocoding and Granular synthesis to create a pallet of sonic motifs.  This material was then taken into the Absynth environment where it was reprocessed, modulated and orchestrated in real-time using a variety of custom built hardware controllers to create a number of long sequences.  The final piece was then constructed using ProTools and mixed in the Electro-acoustic Music Studios at the University of Huddersfield. Amera was selected as a finalist for the prestigious 2009 Arts Electroniques des Concours Internationaux de Bourges prize.
Etch (2007)
(for vocalist, Bodycoder System, live Max/MSP and video / computer graphics)
Duration: 12 minutes
Extended vocal techniques: Yakut, open throat, overtone and Bell Canto singing, is coupled with live interactive sound processing and manipulation. Etch calls forth sonic fauna and pattern flora building soundscapes of glitch infestations, howler tones, clustering sonic-amphibians, and swirling flocks of synthetic granular flyers.
In Etch the video content is manipulated by the performer using the same interactive protocols that govern sound processing.  Visual content is mapped to the physical gestures of the performer and its live manipulation forms a significant part of the piece.  As the performer conjures extraordinary voices out of the digital realm, so she weaves a multi-layered visual environment.
Etch was created in residency at the Confederation Centre for the Arts on Prince Edward Island, Nova Scotia and is dedicated to the artist Hilda Woolnaugh.
About the artists:
The composer and technologist Mark Bokowiec and performer Julie Wilson-Bokowiec began creating interactive work with the Bodycoder System in 1995 and have since developed a repertoire of both dance and vocal works including the Vox Circuit Trilogy (2007) as well as number of full-length music theatre works. They perform regularly at international festivals and artist gatherings and are acknowledged as experts within their particular field of interactive electro-acoustic music. Always theatrical in intensity, their interactive works have been variously described as “like an acid trip with the performer pulling the strings” and as “opening a realm of cyber art that exceeds the human without simply rejecting it” (Drew Hemmant – Future Everything). They have been commissioned twice by the Science Museum London for both performances and interactive instrument installations, KlangArt (Germany), Digital Summer (Commonwealth Games Cultural Programme), were featured artists and guests of the Hungarian Computer Music Association supported by the British Council and have been funded by the Arts Council of England, Banff Centre for the Arts (Canada) and STEIM (Amsterdam) to name a few. Mark’s fixed electro-acoustic music works have been published on CD (MPS music & video) and on a variety of CD collections. Amera (2007) included in the Falmouth concert, was a selected finalist for the prestigious Arts Electroniques des Concours Internationaux de Bourges prize in 2009 and Ghosts (1997) was commissioned by the Arts Council of England. Also in the Falmouth concert programme are two interactive works; V’Oct(Ritual) (2011) was created in residency at Dartington College of Arts, Totnes last year, and Etch (2007) created in residency on Price Edward Island, Nova Scotia. Both pieces very much reflect the spirit of the environments in which they were created.

Mark Bokowiec is the manager of the electro-acoustic music studios and the new Spatialisation and Interactive Research Lab (SPIRAL) at the University of Huddersfield where he lectures in interactive performance, interface and system design and composition.

Julie has creating new works in opera/music theatre, contemporary dance and theatre including: Salome (Hammersmith Odeon – Harvey Goldsmith/Enid production) Suspended Sentences (ICA & touring) Figure Three (ICA) for Julia Bardsley, The Red Room (Canal Café Theatre) nominated for the Whitbread London Fringe Theatre Award, Dorian Grey (LBT/Opera North), Alice (LBT) and a variety of large-scale site-specific and Body Art works. As a performer and collaborator Julie has worked with such luminaries as Lindsey Kemp, Genesis P-Orridge and Psychic TV and the Austrian artist Hermann Nitsch. Julie is a Visiting Research Fellow at CeReNeM (Centre for the Research into New Music) at the University of Huddersfield.
Posted by bodycoderblog at 04:16

Amera_mp3 by marekbuk
"...Bodycoder opens a domain of cyborg art that exceeds the human without simply rejecting it..." MUTE

Bodycoder: Cyborg Dreaming: (DNA)
"...one of the most powerful and evocative performances staged in our galleries..." curator Wellcome Wing (Science Museum London) 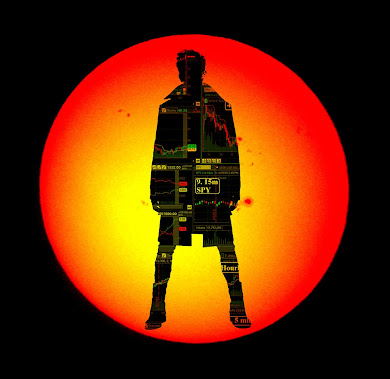 "I just watched the Vimeo of V'Oct and it really is quite beautiful! I love the way it unfolds...dreamlike...like clouds slowly passing by...then out to space...it's got that shaman's trance feel to it, shades of Ligeti and Arvo Part, with a delicate ethereal quality. Julie Wison-Bokowiec looks superb, sounds amazing, I love the subtle gestures and evocative vocalization, you really feel it! It's amazing how you sound ancient and modern at the same time, evoking the primitive whilst signalling the cosmos. I like the vari-speed/pitch shift type thing you use towards the end and the low deep-core voicing" (Julius Vasylenko - Saxophonist) 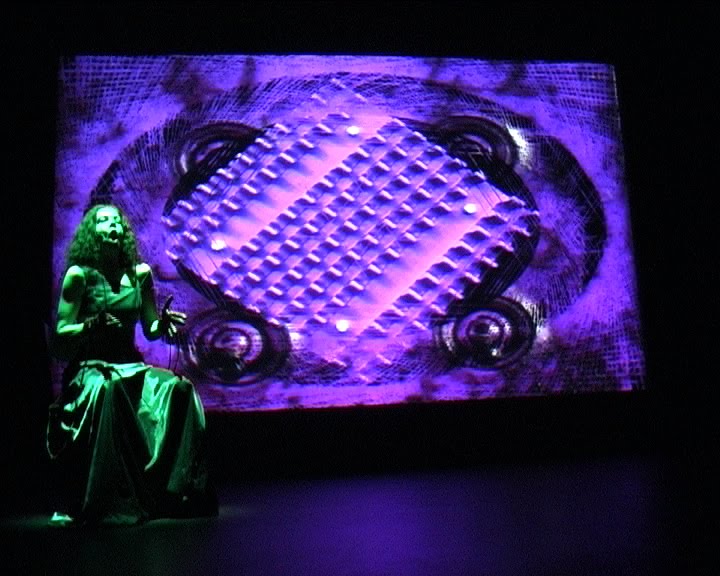